How am I supposed to be 'tolerant' of Islam or any religion?

Christian fundamentalists teach children to kill Atheists and Muslims in "bible camps". No, I'm not making it up, play the video above and you will see what I mean. It's sad and ridiculous at the same time. Not only are they teaching children decidedly un-christian behavior but they are PROUD of it!

The we have Mormon missionaries pushing baptism etc. on little kids and pushing wives to go against their husbands wishes. I have been through it (I won out) and my brother in law (Mormon411) has had the same issues.

The Islamic extremists fly planes into buildings, kidnap and torture then kill film makers for making documentaries they don't like. They declare fatwas on Matt Stone and Trey Parker due to being disrespectful of Mohammad on South Park. Really, South Park deserves a fatwa? The disrespect stems from them depicting Mohammad in a bear suit, Santa suit etc. 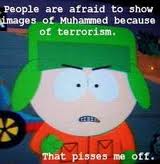 I am at a loss here. I am supposed to be tolerant of all this, turn a blind eye to this and just accept everyone's religious views as 'harmless' right? Don't get me wrong, I am a firm 'live and let live' guy. I just refuse to 'tolerate' bad behavior even if it is bad religious behavior.

Hey Christians, Mormons, Muslims. You don't like what I have to say, Say something about it. Tell me what you think. Stop being PUSSIES and say something. I know you read my blog, I see the traffic, It's funny you chickenshits will post all kinds of stuff on YOUR sites but hide from someone that is willing to debate with you.

Prove me wrong!
Posted by Exhalted Outcast at 10:38 AM

About Me (A little anyway)

Exhalted Outcast
I was born LDS, raised LDS and lost my faith in ALL religions somewhere near my 12th birthday. I am by no means Anti anything, nor am I pro anything. I am rather apathetic really. I am sure you will see that as you read more about me and my thoughts in the time to come. I have been married now to the greatest woman in the world for going on 15 years now!! How she tolerates me I don't know. She should change her name to saint B. She really is one... I have an 11 year old son that is the main focus of my life. He plays and I coach him in Soccer, Football and of course Basketball. I am terrible at all of the above. He on the other hand is great.